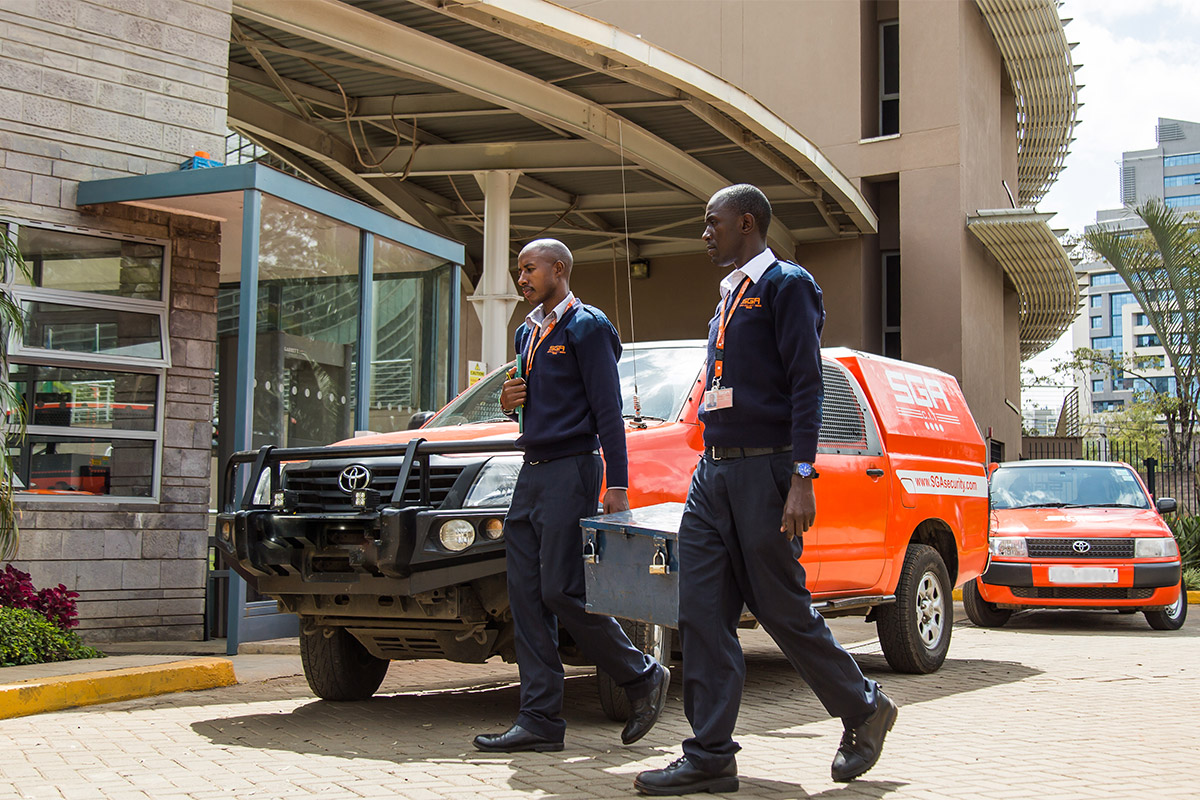 The cash in transit industry has undergone various changes in the recent years to ensure secure transportation of valuables. Historically, the security industry initially began with the use of only a bullion or an armoured car where the valuables are secured in a cage within the bullion car. However, there were major security attacks against the bullion cars transferring cash that led to the then Internal Security Minister, the late John Michuki introducing new regulations of carrying cash in transit, which included the introduction of an escort car with extra security agents. A practice that has continued especially with Kenyan markets making use of armed police in the escort car or lead car.

However, SGA Security takes extra caution and measures in addition to the industry practice to ensure secure conveyancing of the clients’ valuables ensuring customers experience reduced risk and improved safety for their customers and staff, convenient collection and delivery of cash and valuables thus saving them time and money.

SGA prides itself in the meticulous selection of professional staff who have served within the firm for not less than five years and we have adopted various innovations such as the use of superior car tracking systems and advanced locking mechanisms for the SGA vehicles.

The cash in transit service is popularly used by financial institutions such as banks and SACCOs, petrol stations, supermarkets, hotels and restaurants among others.

There are various cash delivery and management solutions depending on the clients’ preferences. First is the banking support services that refer to banking at the client’s premises. The second type of service is the locked container model which is usually a preferred service for clients who do not have the luxury of time or for industries that require a quick turnaround of money such as the oil and gas industry. Thirdly there is the cash centres with vaults that basically refers to the storage of cash for processing. The benefit of this service is that the staff burden is made lighter. Significantly, the replenishment of cash at the ATMs is the sole responsibility of the cash in transit partners to ensure sufficient flow of cash at the ATMs.

As a market leader, SGA Security also offers vaulting services which are the temporary storage of cash collected after banking hours which requires investment in the building, the safes and the technology. The company is also a pioneer in the fast growing at-the-gate-ticketing service for event organisers.

While the cashless economy is a growing trend in Kenya. The security industry is yet to fully evolve with most customers having a strong preference for hard cash. The customer’s strongest need and desire is to see their money reflect in their bank accounts immediately once the cash has been collected. The back stops with the security firms to ensure timely collection and delivery of the clients’ money. The only key differentiating factor in this industry is innovation.

The innovations currently in the market include a cash depositor which is an inverse of an ATM machine. A client deposits into this machine while at their premises which reflects the cash immediately at their bank account, therefore, the cash in transit team collects the money and remits it to the bank. However, this innovation attracts extra costs of having till boxes or vaults and may not be favourable to the Jua Kali sector due to the heavy investment required.

Another innovation in the Cash-in-Transit industry that will not be obsolete is the Point of Sale (POS). The retailer undertakes cash collection. As the cash in transit team collects the cash, they are able to bank the client’s cash and credit the cash through the PDQ machines at the client’s premise. The burden then remains with the security team to bank the money.

The downside of the cash service delivery, other than the restraint of time using the road network, is the cost of doing business in terms of personnel engaged with a minimum of six personnel and resources deployed such as the two vehicles.

While cash in transit has been restricted to basically cash in transit armoured transport with a crew and armed escort, there is a full spectrum of cash security and management solutions. The opportunity for the industry lies in taking advantage of innovations that offer convenient and secure conveyancing of valuables that meet the clients’ demands.